The Illinois Trucking Association has begun to publish monthly rail turn times in Chicago to highlight the problem of terminal congestion and its impact on delivering to shippers in a timely manner.

Chicago has been known for its rail congestion for decades, but measuring the data and comparing the results provides both shippers and truckers with a tool to evaluate which railroads are most efficient. Shippers can use the information to make routing decisions or to pressure underperforming railroads to address inefficiencies.

This project is similar to how the Harbor Trucking Association monitors turn times in Southern California and works with terminal operators to improve their numbers. Both groups are using the same data company — GeoStamp, which utilizes geofencing technology to measure all aspects of a turn.

Chicago truckers can certainly use the data after two consecutive winters of poor performance into the Midwest hub. Union Pacific Railroad ran into problems when Consolidated Chassis Management ran out of chassis in January due to the onslaught of pre-tariff volumes in December. The railroad grounded containers and prohibited truckers from bringing in their own chassis by announcing it would not “cherry pick” containers out of stacks until further notice, all the while assessing daily storage charges to shippers, a form of terminal demurrage. 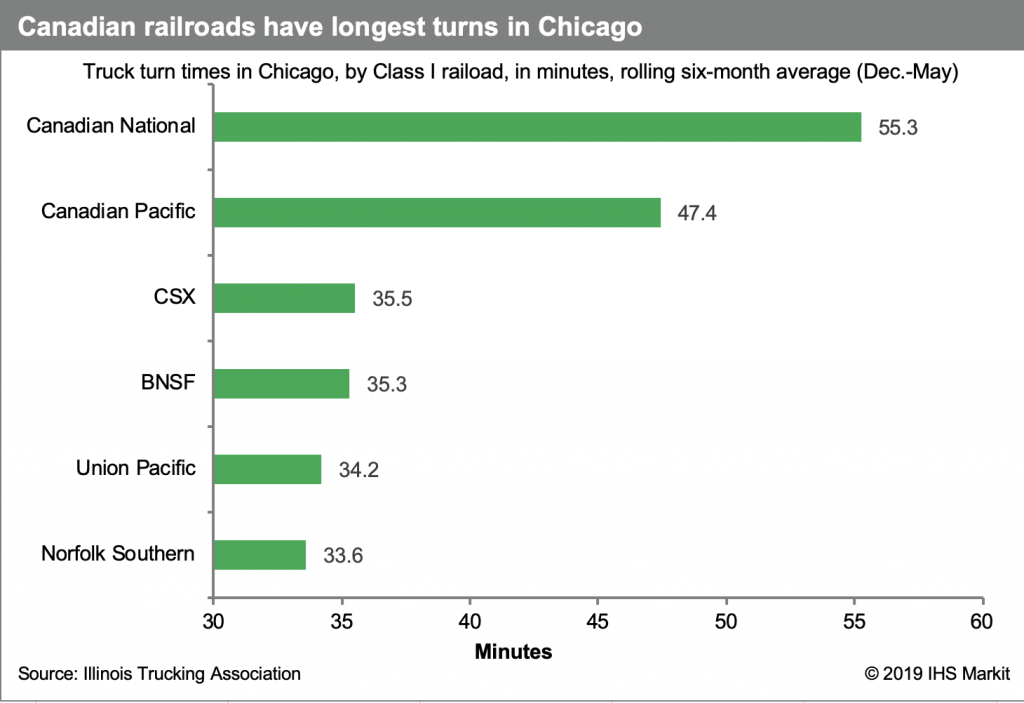 The penalties escalated into the thousands for many shippers. In February and March, BNSF Railway and UP both ran out of well cars, which caused them to prohibit trucks from dropping containers until the situation was resolved. Historic floods in the Midwest also disrupted terminal operations. All these events this winter came after an exceptionally poor winter of 2018 when three Class I railroads had to suspend ingating in Chicago because there were too many containers piling up in yards.

UP, CSX Transportation, and Norfolk Southern Railway have slashed interline services through Chicago, shifting responsibility to transfer containers between railroads onto shippers and truckers, which has also affected turn times. Until recently, Class I’s would handle exchange via rail, known as a steel-wheel interchange.

Even if the turn time data doesn’t provide a solution, the numbers quantify the problem. Time matters even more if the driver is operating an electronic-logging device on regional drays, which strictly tracks hours-of-service compliance.

The Illinois Trucking Association measured 87,271 drayage moves between December and May. The slowest average monthly turn was 46 minutes in February, while the quickest was 37 minutes last month systemwide.

NS, which operates four intermodal terminals, had the quickest turn times by railroad with 33.6 minutes on a rolling six-month average. UP, BNSF, and CSX were closely behind at between 34 and 35.5 minutes.

Canadian Pacific Railway averaged 47.4 minutes and Canadian National Railway tallied 55.2 minutes. CN’s Harvey terminal was the slowest individual terminal with drivers spending more than an hour on average, including a 10-minute or longer line to exit.